Is self-build delivering on sustainability?

Sustainable self-build is at the forefront of many grand designers’ minds as they embark on creating their dream home. Most houses in the UK are built with brick, on a concrete foundation. A quarter of a tonne of carbon dioxide (CO2) is produced to create a tonne of brick, and even more for steel and other construction materials, according to sustainable housebuilder Citu.

Building a typical three-bedroom semi-detached masonry house in the UK accounts for between 50 to 80 tonnes of embodied carbon (CO2e). Putting all this in context, the average person in the UK has a carbon footprint of five tonnes of CO2 per year – so constructing just one new house along traditional lines emits as much CO2 as someone living an average lifestyle does over a decade.

Crucially, the planet does not have to pay such a high price for every new home and self-builders can lead the way – with a helping hand from the regulators and industry leaders.

Why is self-build falling short?

If you’re building your own home, you’re perfectly placed to ensure that its embodied carbon (CO2e) is lower than 50 to 80 tonnes. You can specify low-carbon materials and construction methods and also reduce operational carbon by opting for energy generation and heating via solar photovoltaic panels (PV), an air-source heat pump or other renewables.

So why do some leading self-build projects have a poor record on sustainability? Architect Richard Hawkes, founder of Hawkes Architecture, found that only one of the 20 projects longlisted for the RIBA House of the Year 2021 achieved an A-rated Energy Performance Certificate (EPC), which indicates the energy efficiency of a home and considers elements such as insulation and sources of power.

Only the Devon Passivhaus gained an A-rating. It was designed by architectural practice Mclean Quinlan, incorporating a reclaimed walled garden as part of its structure and including mechanical ventilation and heat recovery (MVHR), triple-glazing, solar power, battery storage and a high level of insulation. Nine of the RIBA-shortlisted projects received a B-rated EPC, while the remaining 10 projects were either C, D or E-rated. 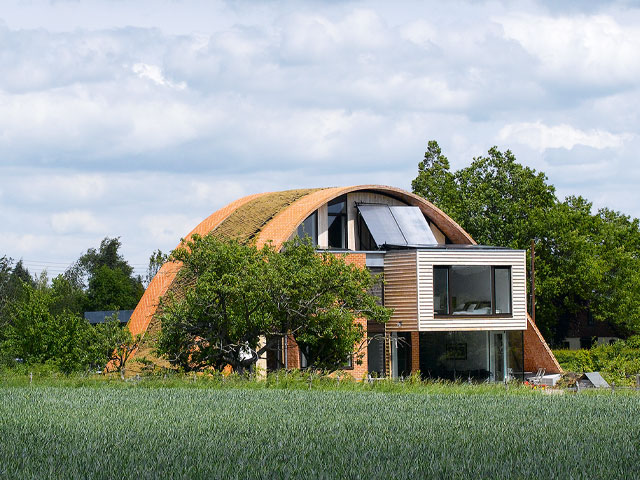 Richard is adamant that change is needed and should be led by government-backed legislation to bring new homes under stricter standards. ‘When I built my house in 2007, it was around the time EPCs and the Code for Sustainable Homes were introduced,’ he says. ‘This set quite an ambitious timeframe that, by 2016, all houses should be designed to be carbon-neutral. Then, in 2015, the government binned the Code for Sustainable Homes following the technical Housing Standards Review. It was a political thing, I guess, under lobbying pressure from major house builders and suppliers.’

Richard feels that the Standard Assessment Procedure (SAP), the government’s current rules on energy efficiency covering self-build homes, could go further, highlighting the transformation of domestic appliance design as an example of what can be achieved when there is political will. ‘The energy-rating system for appliances led to dramatic and quick improvements in performance and efficiency,’ he explains.

The way forward for self-build

The RIBA has set out its 2030 Climate Challenge, a series of aims for architectural practices to achieve in the next eight years. ‘It’s vital that self- and community-built homes consider the environment and meet targets for embodied carbon, operational energy, water usage, and health and wellbeing,’ says Adrian Dobson, RIBA’s executive director of professional services.

But there are practical issues that hinder some self-builders wanting to build an eco home, not least how to raise funds. ‘One important current constraint is the unwillingness of many of our largest mortgage lenders to lend on homes built with very low carbon footprints, in particular those constructed mostly of timber or with green roofs,’ says Andrew Baddeley-Chappell, CEO of NaCSBA. ‘Many mortgage companies continue to insist that properties are made predominantly of brick and block.’

Using recycled materials is an important way to reduce a project’s carbon footprint, but suppliers and the construction industry could do more to make them available. ‘Self-builders often put a lot of research into what they want and are not afraid to ask for advice on ecological solutions,’ says Dan Clements, managing director at the Chartered Institute of Architectural Technologists (CIAT).

‘But the use of recycled materials varies from project to project. As an industry I don’t think we do enough reclamation work on materials that could be re-employed in new projects, and I’m not always sure that the system is set up for the use of some recycled materials. More could be done to promote reuse from a statutory point of view.’ The Devon Passivhaus was the only RIBA House of the Year 2021 longlisted project to achieve an A-rated Energy Performance Certificate. Photo: Jim Stephenson

Passivhaus is considered the gold standard eco design process, but there’s a debate around how low-carbon building should be seen in wider terms. ‘We need to be careful not to pigeonhole what it means to create a highly energy-efficient, low-impact home by pushing for one method over others,’ says Dan. ‘I’m a fan of houses created and built from natural and recycled materials, which are harder to evaluate and certify.’

Sustainable self-build starts at the drawing board. ‘One of the easiest wins is evaluating the size of a new home,’ says Juraj Mikurcik, senior architect and Passivhaus designer at Architype. ‘It’s not unusual for clients to commission something too big for their needs, resulting in an unrealistic, unaffordable design. A focus on sufficiency should be high on the priority list.’

The future of sustainable self-build

The overhaul of Building Regulations in June 2022, which will cover new energy-efficient elements such as the installation of heat pump technology, is a step in the right direction towards more sustainable self-build.

Launched in April 2022, the Boiler Upgrade Scheme (BUS) is an attempt by the government to get more homeowners installing low-carbon heating. ‘How we heat homes is as important as how they look,’ says Juraj Mikurcik. ‘We don’t need new gas connections, but going 10% electric and using heat pumps and clean renewable energy should be encouraged.’

VAT has been cut from 5% to zero for solar photovoltaic panels, heat pumps and insulation, but tax incentives could go further. ‘The system dictates activity to a degree, such as the requirement to completely demolish an existing home rather than retaining parts of it, such as a wall, to meet the criteria for VAT exemptions,’ says Andrew Baddeley-Chappell. ‘There needs to be more joined-up thinking at a national policy level to support self-builders to build as sustainably as possible.’