The Cob House: a sustainable castle in Devon

This giant cob castle took nine years to complete. But was it worth it?

In the last episode of the 2018 series, Kevin McCloud returned to the Grand Designs cob house to meet Kevin McCabe, the man who wanted to build one of the biggest houses in Grand Designs history. McCabe took a vow that his build would meet the highest standards of sustainability. He also declared that he would build most of it with his bare hands – out of mud.

He is known as ‘the king of cob’, but building his cob castle in the East Devon countryside presented McCabe with the greatest challenge of his life. During the nine years it took to complete the gargantuan 1,250 square-metre cob house, McCabe’s marriage of 30 years ended in divorce. He also found himself living in a caravan and borrowing money from friends to meet his financial obligations.

In the face of masterminding the building of Dingle Dell, a modern manor house inspired by the work of Spanish architect Gaudi and South American earth homes, some men would have crumbled. But not 56-year-old Kevin, whose demeanour belies decades of hard graft and ambition. A series of shaded sunspaces with thermostatically controlled windows creates a glazed roof link between the main house and annex. Photo: Mark Bolton

‘I am very resilient and when a problem comes up, there is always a way around it,’ McCabe says. The Grand Designs cob house includes a 650 square-metre main house with four bedrooms and six bathrooms. There’s also a kitchen-dining room, living room, utility, cloakroom, study, gym, games room, plant room, two sunspaces and a greenhouse. Not forgetting the 150 square-metre annex with three bedrooms, two bathrooms, two living rooms, a kitchen, sunspace, cider shed and a workshop. However, this massive project was not without its problems. With its curved cob walls, the lower level is sunk into the hillside. Photo: Mark Bolton

Cob (a mixture of clay, straw, sand and water) has its own challenges as a building material. First used more than 10,000 years ago, cob is renowned as the most sustainable building material ever devised. During the build, international experts and practitioners came along to assist and study the master at work.

Kevin regards it as ‘a very sculptural material, enabling unique and beautiful forms’, such as the staircase that winds through the middle of the main house. However, each ‘lift’ of cob must be moulded into shape manually and requires long hours of warm, dry weather to set firmly. This, unfortunately, is a requirement that can’t always be guaranteed in Britain.

Using cob on such a large scale (the walls are three-feet thick) had never been attempted before in this country. However, the mechanics of the job did not deter Kevin, in spite of the rainy summer of 2012. He set about drafting in his trusty band of workers to erect the walls and dig the foundations, which run for more than a quarter of a mile. The house is accessed by a wooden bridge that leads to the entrance hall. Photo: Mark Bolton

It was the financial aspect that presented the greatest hurdle. In 2013, Kevin’s original budget of £350,000, raised by borrowing against his existing home – also a cob-build, which he had shared with his former wife, Rose – had run out. The couple decided to put the home up for sale, but the first offer was withdrawn. Not long afterwards, Kevin and Rose split up and then divorced.

After almost three years of work, not a single room in the new house was habitable. Progress faltered as Kevin struggled to combine finishing his project with the need to earn some money. ‘All the proceeds from the eventual sale of the original home went to the divorce settlement,’ Kevin explains. ‘And to my surprise, because I’d been working on Dingle Dell for three years, I discovered that my business had not made a profit, which meant I couldn’t borrow from any banks. In fact, I found myself needing to borrow from friends.’ The living room features a twin log store on either side of the cob fireplace. Photo: Mark Bolton

A change of fortune

The loans were temporary, of course, and Kevin had to take on as much paying work as possible in order to repay friends. Meanwhile trying to fund continued work on Dingle Dell, which was by now in his sole ownership. ‘I lived in a caravan on site for the first year, until I finished the top floor of the annex, and I moved into that shortly before Christmas 2014,’ he recalls.

‘Gradually, as I was able to afford time and materials to work on the house, I began to make steady progress. By Christmas 2015, both floors of the annex were habitable and Kevin’s partner Karen, and her two daughters Madi, aged 15, and Livi, aged 11, were able to join him in living there. ‘From that point, we continued to make steady progress, as and when I earned the money to fund it, rather than rely on borrowing,’ he says. The kitchen cupboards were handmade from cob and timber by Kevin. Photo: Mark Bolton

They now all live in the main house, which was completed earlier this year. Thanks to a range of energy-saving measures including solar panels to heat the water, pipework and butts to harvest rainwater, and a borehole for the cold water system, the house produces more energy than it consumes.

Dingle Dell is named after both the traditional term for a small wooded hollow, and a corner at Brands Hatch racing track, where Kevin once raced with his late brother, Simon. Its efficiency means it meets Code for Sustainable Homes Level 6, and Passivhaus levels of energy consumption.

The impressive status is just reward for all the money and effort that Kevin has put into the project since the beginning. In 2009, he spent more than £50,000 on consultants, who helped him adjust his design to present a convincing case for the project to the local planning authority. Each of the children’s bedrooms has a rope swing suspended from a roof beam. Photo: Mark Bolton

‘The house pushes the boundaries for earth buildings and shows us what can be achieved,’ remarks Kevin’s structural engineer, Barry Honeysett, on undertaking a cob-house project. ‘Unlike blockwork or timber, there is no British Standards code of practice or any design information to guide us, so we had to start with basic engineering process, testing samples of the soil and working out what it could safely carry.

‘Every element had to be carefully designed to make it practical and manageable,’ Honeysett continues. ‘The floors and the large expanse of turf roof are supported by a timber frame of radiating glulam [glued laminated timber] beams. These span the wide living space between the central stair core and cantilever beyond the outer walls.’ 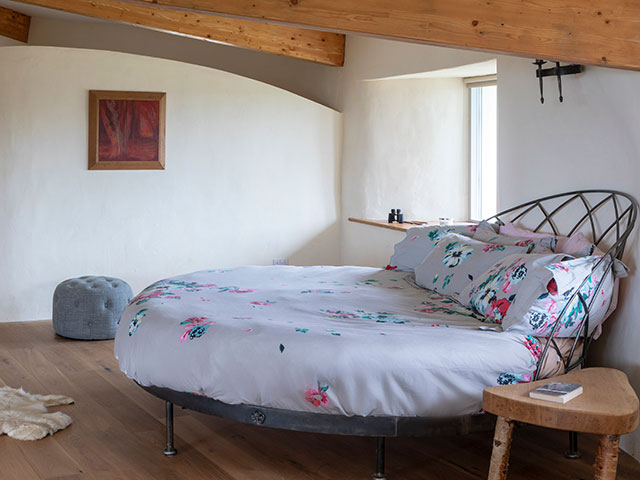 The circular bed adds interest to the minimalist layout in this bedroom. Photo: Mark Bolton

‘Properly built and correctly maintained, cob is by far the most comfortable material to live in as it regulates heat and humidity naturally,’ says Kevin. ‘It couldn’t be more environmentally friendly. It’s made from the local environment and at the end of its life, which could be a thousand years or more, it can meld back into the soil, or be re-used as new cob.’

Set into the thick walls of the two buildings that make up the house is a series of huge window frames. Each of these is triple-glazed, and within the glazed link sits a greenhouse, where Kevin and Karen grow tomatoes. Each building has a wildflower meadow on its roof, a softly angled design that mirrors the wavy lines of the surrounding hills. To meet stringent regulations, walls were insulated with polystyrene – 100% recyclable and A+ rated for sustainability – and rendered with lime. A place to chill out

Kevin insists that the Grand Designs cob house is a very relaxing place to be: ‘It’s always warm everywhere and the materials are all quite natural, which creates a general feeling of well-being. It just feels lovely to be in any part of it.’

The size and scale of the rooms in the main house are breath taking and they’re so beautifully simple, they need no ornamentation. ‘We didn’t want the interior to feel too contrived or over-designed,’ says Kevin. ‘With no deadlines or financial pressure to finish, we’ve had time to let ideas evolve and to create elements such as the earth floor, the cob and oak staircase, the arrow-slit lights and the glass wall in the main bathroom.’

Outside, Kevin says that there is still one more bridge and some balconies to construct, and then there is the landscaping to complete. He and Karen are also working on the design for a bespoke cob and oak, zero-carbon, indoor swimming pool.

Meanwhile, his magnificent cob house stands proud among the rolling hills of the East Devon as a monument to the art of cob-building. Its swooping curves and exquisite sense of place also mark the unquestionable determination of the king of cob to conquer all the odds.