Grand Designs houses you can stay in

Fancy staying in a Grand Designs house? These homes are all available to book

Did you know there are Grand Designs houses you can stay in? It’s one thing watching an amazing build come to life on the TV, but actually setting foot in one is another experience altogether. So why not rent one? A number of the famous TV houses are available on rental platforms such as Airbnb. Here, we’ve tracked down the best Grand Designs houses to book for a staycation…

This post contains affiliate links, from which we may earn a commission

Located in the hills of Bowness, overlooking Lake Windermere, Dome House in the Lake District is an idyllic rural Grand Designs house to book. After completing the build in 2011, with the help of an anonymous donor, self-builder Robert and his family later decided to sell the home in 2016, to move to London. The home has since been converted into a luxury hotel.

Book to stay at the Dome Lake House Back in 2005, Monty Ravenscroft and his partner Claire, built their dream home in the bustling Peckham area of London. With savvy space-saving features, a retractable roof in the main living space and a spa bath in the master suite, you can rent the entire Grand Designs house on your next London visit.

Book to stay at the Peckham House via Airbnb Kevin McCabe’s eco Cob house in East Devon was a labour of love, which was only completed on a Revisited episode of Grand Designs. While you can’t stay in the main house, you can rent the annexe of Dingle Dell and stay in one of the most iconic Grand Designs of all time.

Book to stay in the Dingle Dell annexe via Airbnb Gregory Kewish and Rebecca Sturrock built this beautiful cross-laminated timber cottage on the grounds of Rebecca’s parents’ land to house their growing family. ‘We wanted a healthy home with lots of light, which captured the view across the Cornish countryside,’ said Gregory. Now you can rent the cottage to stay in this picturesque part of the country.

Book to stay at this Timber Cottage via Airbnb 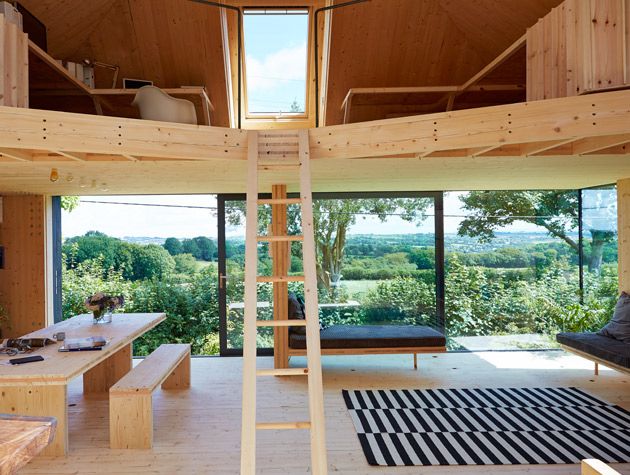 Located at the edge of the New Forest, this quaint dairy cottage makes for a special place to stay. After being devastated by fire in 2003, Cheryl and Alex Reay lovingly restored it to its former glory with green oak frames and expansive modern glazing to provide views over the nearby bird sanctuary.

Rent The Dairy Cottage via dairycottagenewforest.co.uk The Apprentice Store is located in an Area of Outstanding Natural Beauty in Bath, complete with rolling hills and woodland areas. The property, Grade-II listed building once boasted England’s largest waterwheel. But it had been derelict for decades and was on the local council’s buildings at risk list until Ian and Sophie Cooper came along. The memorable Grand Designs paper mill conversion was a challenge of scale and complexity.

Rent the Apprentice Store via Airbnb Angelo Mastropietro inspired viewers with his amazing cave house transformation. Situated near the Wyre Forest, Worcestershire, the Rockhouse Retreat is elevated among the tree canopy. When he first spotted it, Angelo’s ‘gut feeling was to restore it into a romantic retreat’. He ‘felt like it was meant to be’ because his surname translates to ‘master of the stone’.

Book to stay at the Rockhouse Retreat via therockhouseretreat.co.uk The Grand Designs Dugout in Herefordshire was a slow burner. Self-builders Ed and Rowena Waghorn bought the eight-acre plot in 2000, but didn’t move into their home till 2014. A small budget and the desire to do most of the work themselves contributed to the slow progress. But the results make for the perfect staycation accommodation – a hilltop hideaway with wonderful views across three counties.

Book to stay in the Dugout via lifeonthehill.co.uk

Watch the Dugout episode of Grand Designs (2011) on All 4 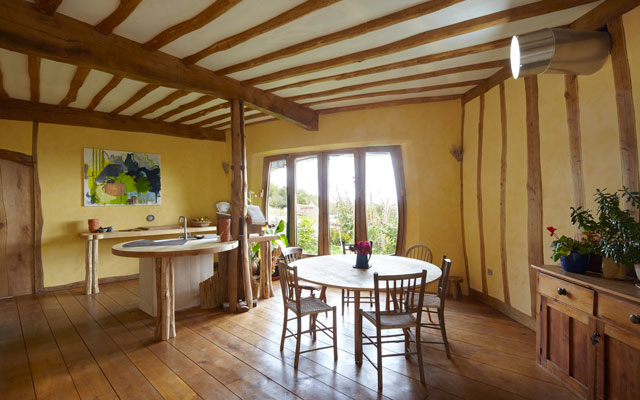