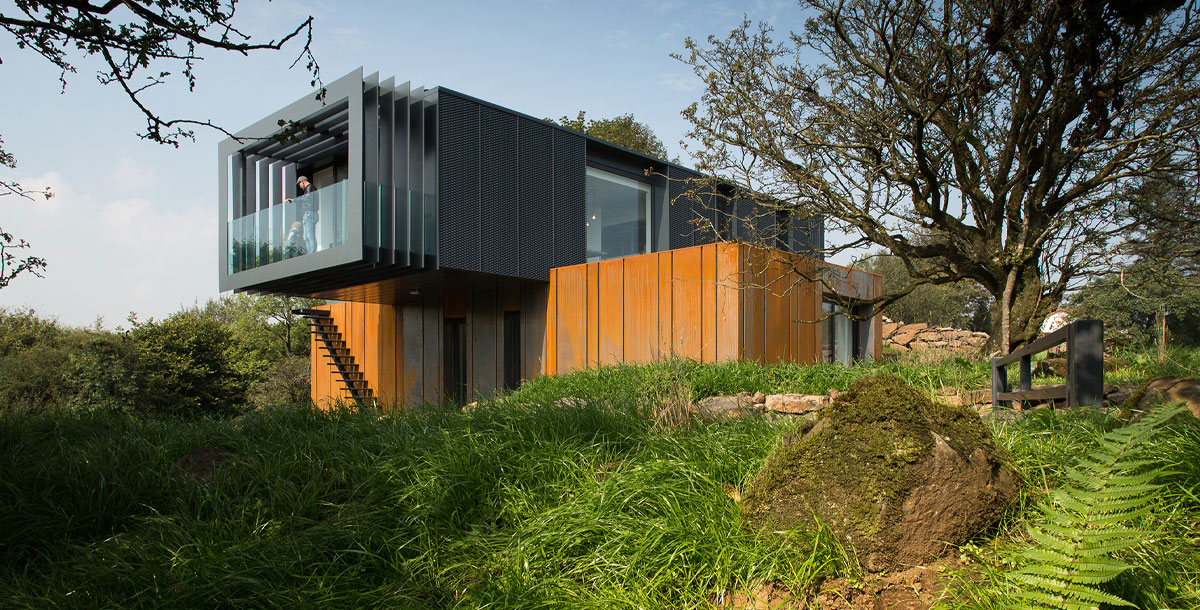 Which projects made it into the presenter's top 10?

Ever wondered what Kevin McCloud’s favourite Grand Designs houses are? There have been some real gems since the first episode of Grand Designs launched in 1999. And with more than 100 projects to choose from, picking his top 10 was a challenge.

Despite the variety, each project has one thing in common – a remarkable story of the sheer determination of self-builders to create a unique home for themselves, while overcoming a fair few obstacles along the way. Relive some of Kevin McCloud’s favourite Grand Designs houses.

Four shipping containers make up the structure of this 115 sqm house by architect Patrick Bradley, built on on his parents’ farm in County Derry. The containers were stacked in a cross shape and covered in natural-coloured cladding that differentiates between the communal and private spaces. The build took seven months and the budget was £130,000.

Kevin McCloud says: ‘This is where engineering and steel meet landscape and it is beautiful. It’s rare to come to a place and find a building that lifts the spirits, such as this. This is proper architecture, a genius exercise in upcycling and, now, a powerful part of this place.’ The site of this property was big enough for six houses and cost just £78,000. It took five years to clear the site and the build cost £600,000. Straw bales and sandbag cladding were unusual ingredients for this London build and Kevin loved it for its eco-qualities.

Kevin McCloud says: ‘This is remarkable. Simon and Jasmine are heroes of the self-build community and I am proud to know them. It hasn’t and won’t destroy the planet, and it hasn’t cost the earth. It’s not just an example of how we could, and should live, this is a clarion call.’ Ben Law’s Wooden House took more than eight months to build and cost just £28,000. The project struck a deep chord with viewers (4.5 million watched, making it one of the most popular episodes of Grand Designs ever aired) as Ben built walls from 300 barley bales. Now, he runs courses on sustainable woodland management and eco-building, and runs a few ticketed open days each year to visit the house.

Kevin McCloud says: ‘It’s an eloquent essay about sustainability… a love story between one man and a place.’ Planning permission took 2.5 years for this stunning underground home in Peckham, south east London, and two tree preservation orders were issued. The home, which cost £220,000 to build (including the plot), features a retractable roof that measures 10.5 sqm. Other features include an LED light fitting that doubles as a shower, and a bed that slides away to reveal a bath.

Kevin McCloud says: ‘With its hidden baths and sinks, there is a magical side to this home. ’ The owners of the 21st Century Chalet bought the plot in Woodbridge, Suffolk in 2006 and got planning permission in 2007. A year later, one of the owners was diagnosed with cancer and, later, tragically passed away. The house was scaled down and building costs were cut back from £579,000 to £220,000. But despite these unbelievable challenges, what emerged was house that was beautiful, sustainable, dramatic and truly inspiring.

Kevin McCloud says: ‘I love this place… a home with all the attitude and resilience of its owner.’ When the owners bought a gamekeeper’s lodge in rural Kent, they also inherited a huge concrete water tower designed by architect Sir Edward Lutyens and originally built in 1915. The owners reinstated Lutyens’ original roof and cut windows into the concrete walls. Remarkably, they sold off the lodge to pour all their energies into preserving the water tower. Costs escalated by £50,000 but at almost 50 sqm bigger than the average UK new-build, the results are inspirational.

Kevin McCloud says: ‘A build with vision and integrity.’ The owners of the Grand Designs Isle of Wight House transformed a 1970s bungalow on a budget of £200,000. The seventies bungalow was clad in burnt larch on the outside and filled with Modernist art inside. In the process, the owners quadrupled the footprint of the property – adding 214 sqm to the existing 84 sqm footprint. They extended it at both ends and included a private living space for their daughter in the centre.

Kevin McCloud says: ‘It’s one of the great illusions of architecture, pulled off with utter bravado.’

Read more: Multifunctional modernism on the Isle of Wight The arched frame of this Kent property was inspired by a 14th Century technique. The one-acre plot included a worse-for-wear thirties bungalow, which the owners bought in 2006 for £353,000. It’s constructed from 26,000 handmade tiles and 10 tons of newspaper were used as insulation. The triple-glazed argon-filled windows cost £43,000, but the house is now one of the best-performing Passivhaus dwellings in the UK.

Kevin McCloud says: ‘It is one of the greatest illusions of architecture, pulled off here with utter bravado. Richard has produced a beautiful house full of surprises, of joys of delight; it is creative but it is also risk-taking and ground-breaking. It is an architectural first in this country.’ The owners saved for 10 years to fund the build for this 90 sqm home. It was completed within nine months and energy bills are just £50 a year. The house is sympathetic to its enviable location yet very different from the nearby local cottages. It has a unique lozenge shape with concrete foundations and reinforced steel ribs to counter the challenging weather conditions of Skye.

Kevin McCloud says:  ‘It’s nestling beautifully into its setting… one of my favourite houses. Ever.’

Read more: Convention-breaking eco home in the Isle of Skye The original barn in Colchester, Essex, dates from around 1560. The owners saved £500,000 on the surveyor’s quote of £1.3million. A modern roof belies the stripped-back nature of the interior – it’s eight and a half metres tall and measures a huge 690 sqm. There’s no plasterboard or paint to hide the bare bones of the structure and the shell of the barn has been transformed into a liveable space.

Kevin McCloud says: ‘Most of us when faced with a building of this scale and size would get freaked out by the challenge of doing anything with it – but not Ben and Freddie. What they made was a grand, triumphant addition to their collective autobiography of made things… I love this place… a home with all the attitude and resilience of its owner… A triumphant addition to their autobiography of made things.’