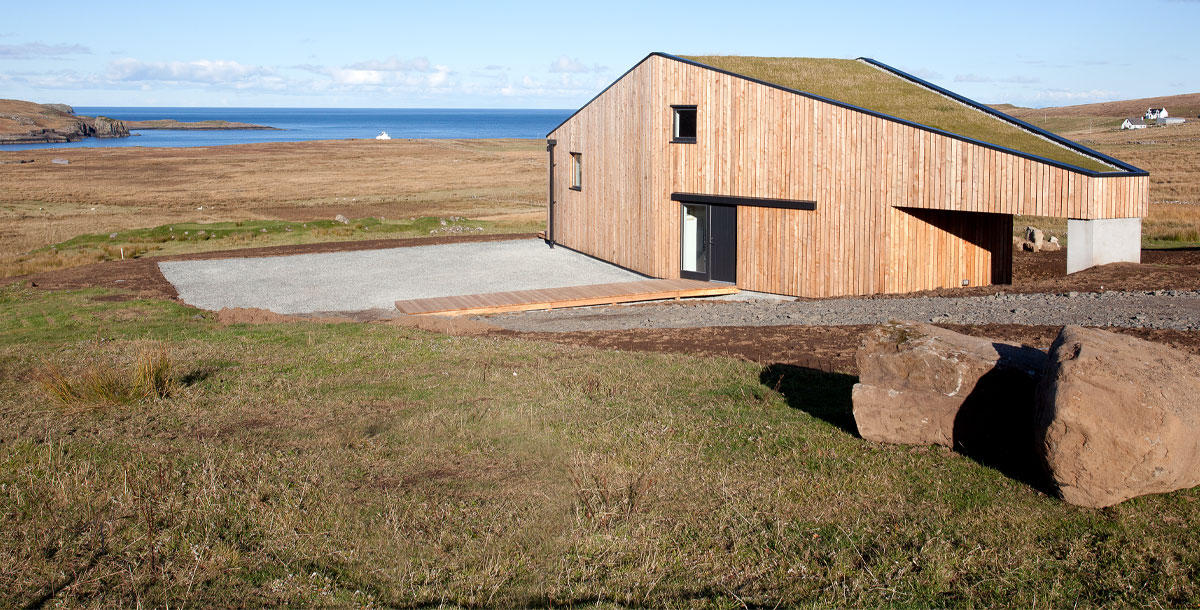 A modest budget was outweighed by sheer determination and a crafty design approach for Indi and Rebecca Waterstone’s Isle of Skye eco home, first shown on Grand Designs in 2012. Four years ago, Rebecca and Indi Waterstone left the hustle and bustle of Edinburgh for the majestic beauty of the Isle of Skye, with dreams of building an eco house on the wild and rugged landscape of the northern-most island in the Inner Hebrides.

For Indi, this had been a lifelong aspiration. At 15 years old, she had visited the Findhorn Foundation, a community outside of Inverness that built sustainable architecture long before it was fashionable. It was there that she first saw a turf roof – one of the eco features of the house she would build with her partner Rebecca almost 30 years later.

The plan to build on Skye took shape after a fruitless hunt for the perfect house. Eventually, the couple decided if they were to live in their dream home, they’d have to build it themselves. A decade of scrimping and saving meant that they had just under £200,000 to spend on the project, including the cost of the land.

As an art teacher and bus driver, budget was tight and inflexible, so every last detail had to be thoroughly thought through. From a rented bungalow, they took their time finding the perfect spot – which turned out to be a half-acre of land on Skye’s northern tip, with jaw-dropping views over a headland leading out to sea. It was here they would finally fulfil their ambition of building a low-energy, modern home using natural materials – a bold move considering the island is dotted with whitewashed, stone crofters’ cottages and not much else.

But they were quite comfortable with standing out from the crowd. With the help of architect Alan Dickson of local practice Rural Design, the pair persevered with a house and accompanying artist’s studio that are sympathetic to the landscape. ‘It’s a different shape to the other houses on the island but we think it fits in very well,’ says Rebecca.

Unpredictable weather was central to the design and construction – which took eight months from March 2012 – as gale-force winds and rain batter the exposed, north-facing site fairly regularly.

The timber-framed building was reinforced early on with two steel goalposts rooted to the concrete base – a tricky part of the build as concrete won’t set properly in wet conditions – but absolutely vital to gird against the weather.

The timber-clad, two-bedroom structure swells in the middle and tapers at the back and front, with a wind-resistant, sloped roof extending almost to the ground. ‘It’s designed as a streamlined shelter burrowed into the hill,’ says Dickson. Placed for the perfect view

It’s a radical piece of architecture for Skye, but sensitive at the same time. The larch cladding, which will turn silver with time, and the turf-covered roof make it practically disappear when approached from the road 50 metres above. ‘I think of the orange timber you see at the moment as a bad fake tan,’ Dickson jokes. ‘The silver colour will come out in about a year and soften its impact.

’ The couple only wanted as much space as they needed and could afford, which translated to a modestly sized house of 90 square metres. To the left of the ground-floor entrance is the open-plan living, dining and kitchen area; the double-height space is shared with a mezzanine master bedroom, accessed by a small set of stairs.

There’s also a guest bedroom and bathroom at the rear on ground level. The house is oriented in the direction of the view, almost like an arrow. ‘We wanted to come in and look right through the living space out to sea,’ says Rebecca.

Like everything else, the interior is simple and unfussy. The couple opted for softwood floors and white walls as a base for minimalist furniture and a natural palette of heathery purple, sea-blue and grey.

The couple’s own abstract landscape paintings adorn the walls, which will start popping up with more regularity as they make use of the new artist’s studio. Practically speaking, the structure is unbelievably energy efficient – heating bills for the year are expected to be less than £50 – but, surprisingly, it doesn’t have a lot of snazzy eco features typical of this type of new-build.

Expensive solar panels and ground source heat pumps were not an option with their budget. The only source of heat is a wood-burning stove in the open-plan living room, which is used in tandem with a mechanical ventilation and heat-recovery system. The reason it works so well is because the house is painstakingly insulated and airtight, says Dickson.

‘We tried to adopt a much more minimal solution – its kind of restrained in terms of technology,’ he explains. The money was spent on top grade, double-glazed windows and glass doors that stand up to 100mph winds. Extra-thick layers of glass wool and tape keep the house well sealed, which was confirmed by an independent air-tightness test required for new homes on Skye. What’s more, the turf roof is a natural insulator, retaining heat as well as protecting from noise and cold. During construction, 18 tons of soil were spread over several layers of membrane, and, in what made for an emotional moment, Indi and Rebecca got their hands dirty and unrolled the grass themselves. Fortunately, turf is a fairly low-maintenance option; Indi and Rebecca plan to let it grow a bit wild so it blends into the environment even more.

Aside from a slight delay in the initial planning application, it was a fairly smooth ride, concludes Rebecca. This was down to a lot of forward planning before they were on site and a visionary architect. Of course, there were minor changes at the last minute, but being clear about priorities helped realise this build. ‘The thing for anyone setting out to build a house is to stick to your guns,’ says Rebecca. ‘Always believe that it can happen. We didn’t have much money compared to a lot of people, but we were able to build something special in a place that we love. We have proved it can work.’