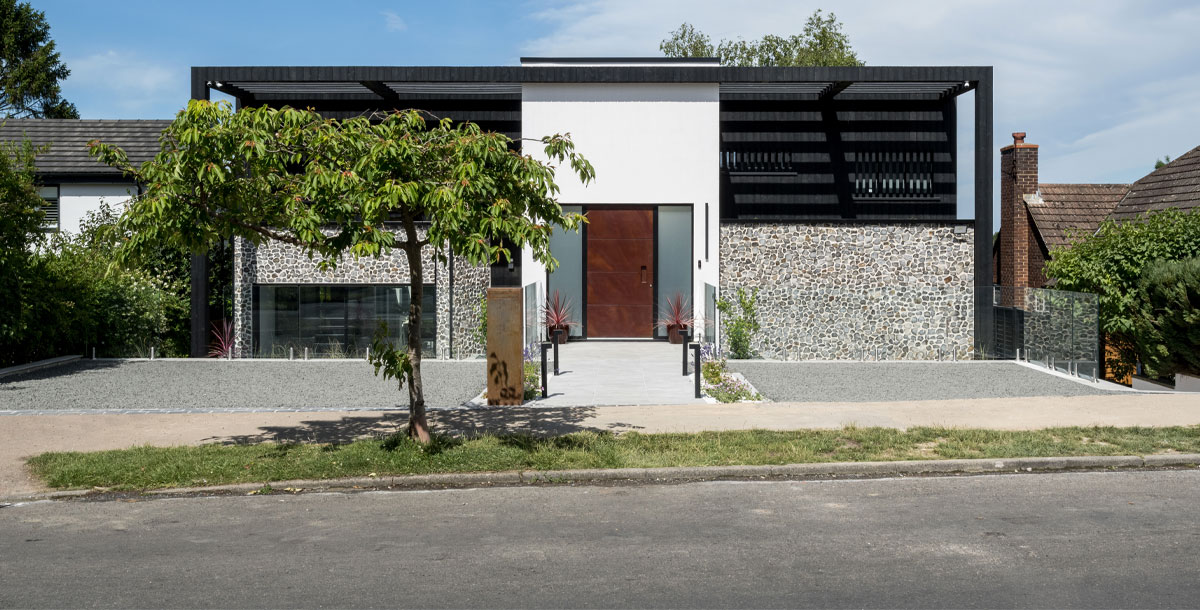 This black, boxy home in Chess Valley, Hertfordshire, stands out for all the right reasons

When Zimbabwe-born Davi and Matt from Australia set out to build a daring home that reflected their multicultural backgrounds, it wasn’t the planners that raised an eyebrow, but the neighbours. The modern, boxy Grand Designs house in Chess Valley was the first of its kind in this leafy Hertfordshire suburb.

The couple were determined to create a home that reflected both their backgrounds, opting for a design featuring flint stonework and charred larch cladding, combined with white render and large expanses of glazing. Zimbabwe, after all, means ‘houses of stone’ in the Shona language.

The extensive use of timber, indoors and out, evokes the agricultural landscapes of both Davi’s and Matt’s childhoods. Davi and Matt had originally planned to renovate the £800,000 bungalow that stood on the site, but realised that self-build offered a better route to creating a modern five-bedroom home with room for their two young children and visiting relatives.

The couple allocated a budget of £550,000 to the build, raised from a combination of savings, a loan and the sale of assets. They had been quoted double that, but opted to project manage the build themselves and run a tightly controlled schedule to keep costs down.

Their lack of experience, the scale and technical difficulty of the build and the steeply sloping site didn’t phase them. Despite both continuing to work full time in the city, where Davi is a financial strategist and Matt a digital product designer, they were determined to complete the house in nine months.

Wait until you see the plans for Davi and Matt’s eye-popping new home 👀#GrandDesigns pic.twitter.com/EpbwDCsiuE

The architect, Nicolas Tye of Tye Architects, designed a prefabricated steel and timber structure that would be made off-site as structural insulated panels (SIPs).

The home is made up of three boxes that cascade down the slope, requiring a significant dig to lay the concrete foundations. The main living spaces sit on the ground floor, as well as a guest bedroom and two studies. The master suite, children’s bedrooms and another guest room are on the first floor. There’s also space for a snug and home gym on the lower ground floor.

Work began in March 2021, and the first problem came when digging out the foundations. The sloping site made access difficult for the machinery. That, combined with the discovery of an underground sewer, meant some of the site had to be dug out by hand. Gale-force winds then stopped work for a further two weeks. The open-plan kitchen-diner and living space leads on to the sun terrace via huge sliding doors. Photo: French + Tye

The delays meant that the timber SIPs arrived on site three weeks later than scheduled. At this stage of the build, the couple found themselves £26,000 off their budget.

Plus, determined that the project would run like clockwork, Davi and Matt had ordered the windows before the timber panels were fitted, so the gaps for the windows had to be precise. It also meant that, due to delays, the glaziers arrived onsite while the SIPs were still being installed, creating difficult working conditions.

Fortunately, after some manhandling – including the innovative use of a car jack – the windows did fit. By June 2021, the building was almost watertight, but Davi and Matt were now £35,000 off budget and forecast the overspend to be closer to £50,000 by completion: ‘It’s death by a thousand cuts,’ said Matt. ‘We’re getting to the end of our cash funding.’

Then, the post-Covid UK-wide supply shortage hit, causing a dramatic spike in prices. The couple were forced to buy cheaper goods with longer lead times, setting them even further behind schedule.

They were originally quoted £100,000 by the flint stone cladding specialists, but by this point the couple were £75,000 over budget. To cut costs, they took a gamble on one of their original builders, who had some experience working with flint in his native Moldova. He had no experience of working with lime render, however, and the couple were forced to compromise and use concrete instead. The rear of the Grand Designs Chess Valley house makes the most of the sloping site with outdoor spaces on multiple levels. Photo: French + Tye

Despite the interior of the house being far from complete, Davi and Matt moved in in November 2021 with a makeshift kitchen, and started decorating themselves rather than paying for additional labour.

Finally, in July 2022, 17 months after they started, their Grand Designs home in Chess Valley was complete. The final cost of the build came in at around £710,000.

‘It was really hard to juggle the work-life balance,’ said Matt. ‘Actually there was no life. It was just all work. It was intense.’ Davi and Matt with their two children, Fraser and Chenai. Photo: French + Tye

Despite the stress, Kevin McCloud called the build a ‘multicultural, international triumph’. Much of the interior features panels of dark timber against white walls, with contrasting lacquered birch ply against grey walls in the kitchen.

A huge skylight above the entrance hall floods the space with light. As you head down the stairs into the open-plan living space, the views over Chess Valley unfold via a huge expanse of glazing that leads out on to a spacious sun terrace. Upstairs, the bedrooms overlook the green roof, with the valley on the horizon.

‘Davi and Matt’s home does not conform, but it does embody them,’ said Kevin on seeing the completed build. ‘They have a bridge and moat instead of walls and a hedge. The Corten steel door, charred larch cladding and brise soleil sunshade all evoke arid landscapes.’

This bold, boxy, black-and-white house may not be to the neighbours’ taste, but it is certainly a striking addition to suburbia.

Watch the Grand Designs Chess Valley episode here on All4